Our household has been overtaken by teenagers.  My husband and I are now outnumbered by no less than three of them. Bailey joined this exclusive hormone driven youth club when she came into heat for the first time in December.  Truthfully, my youngest son is still only 12 years old until March.  He just hit puberty early – about a year ago.  He sprouted to become the second tallest in the household (pushing me into third place) and is closing in on the top position held by my husband.  Although Bailey’s heat has ended, certain behaviours emerged during her cycle.  They do not appear to be going away.  A week ago, Bailey acted differently when I went to arouse her at 5 am.  Early morning is when she goes outside with me to do the first business of the day.   In the past, Bailey would be already sitting or standing with her tail wagging before I had touched the knob of the door leading to the entry room.  Bailey sleeps in this area during the winter.  Her acute hearing used to prevent me from sneaking past her to do other things while she remained sleeping.  I could not get my outer gear on fast enough before Bailey would be ringing the bell impatiently.  I had just taken her manner of springing off the floor to greet me as the norm.

Nowadays, she does her best to ignore, just like our sons do, my commands to rise and shine.  Like my other sleep-loving teens, Bailey has developed her own arsenal of passive aggressive tactics.  Bailey will remain lying on the floor sleeping or pretending to do so.  Neither the squeaks from the entry room glass door being pushed open nor the closet doors being pushed back elicit any movement from Bailey.  She “appears” dead to the world.  I am tempted to begin my early morning chores. What’s stopping me?  The sleeping fur mass called “Our Sweetness”.  She will pick that moment when I am not around to decide she needs to go outside immediately.  After 7 ½ hours of sleep, Bailey’s ability to hold on until I can get fully dressed wanes with each passing moment.  I have unwittingly learned that Newfoundland puppies hold a lot of liquid.  Since I am not the risk-taker of the family and clean-up usually falls on my shoulders, preventive measures are in order.  That means Bailey must go outside on a set schedule.  I trudge on with the task of getting dressed while calling for Bailey to shake a leg.  Even if she attempted to do so would be encouraging.  I catch sight of an eye opening slightly.  I  turned more towards her and it suddenly shut.  Bailey gives off a deep snore.  I am beginning to suspect she is faking it.  Then, like a choreographed dance move, Bailey sighs and flips herself over to her other side exerting only minimal effort.  Her back is now towards me.  She lazily stretches her legs and paws out before resuming her nap.  It is at this point I inform her that such tactics will not work on me.  I have already become immune from similar experiences with my other two teens.  She is not stirred by my attempts to make her feel guilty.  After all, I am only multi-layering myself in clothes and overheating while doing it for her benefit.  I would be happy to sip a hot cup of java as I ease into my morning.  I remind her that duty comes first and we must be disciplined! 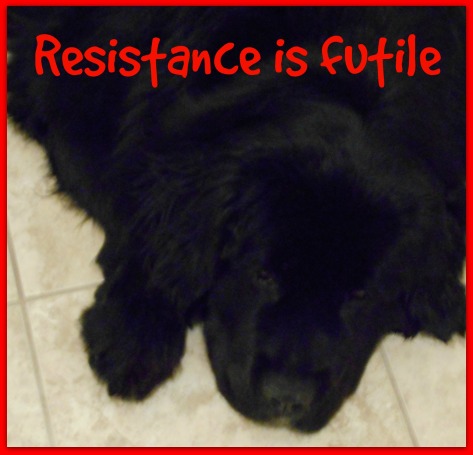 I slip my feet into my boots.  With that, I announce we are ready to go out.  Upon seeing that I have not taken ANY of her obvious hints and that I am determined to go out, Bailey slowly, reluctantly, and theatrically struggles to get up.  Yes, I feel guilty even if Bailey does not.  She looked so comfortable and content.  Do I sound a little envious?

Just the other day, she refined her tactics and lay directly across the door effectively blocking me from getting to my winter gear.  Fortunately, the ceramic tiles offer little sliding resistance to fur.  I was able to start pushing her aside with the door.  Upon seeing that her latest strategy had not worked, she relented and moved slightly to let me in.  She didn’t get up though.  That would have been too much effort!  If this situation continues, I may have to resort to my ultimate weapon.  After all, the smell of frying bacon and fresh waffles hot off the grill always manages to rouse my boys.  I have six more years to go with my boys as teenagers.  The silver lining in Bailey’s case is she will be through this stage much sooner.