Last night, I had a revelation.  Bailey’s nightly grooming sessions have transformed into highly pampered spa treatments.  In the beginning, these sessions were basic, simple and short.  Staying still while being groomed was difficult task for an energetic pup.  Thankfully, Bailey came with soft puppy fur and a slicker brush did the job.  Things became more complex as time went on.  Bailey’s puppy fur gave way to her adult coat.  I was a bit intimidated with maintaining a double-coated dog.  I often wondered if I was doing an adequate job.  I had viewed photos of rescued Newfoundland dogs on-line prior to getting Bailey and I was well-aware that matted coats prevent air from circulating near the skin.  Skin infections can result leading to an unhealthy dog and costly vet bills.  Many of these rescue dogs had been neglected.  Their coats were so severely matted that the only option left was to clip the fur short.  A well-informed Newfoundland dog owner knows that shaving the coat should only be done as the last resort.  Their coat is designed to keep them cool in warm weather and warm during cooler temperature months.  I read several books and watched a few videos on how to take care of a dog with a double-coat.  Grooming is not optional for a Newfoundland dog but rather a necessity.

Regular ear and teeth cleaning were also added to the list of grooming steps.  Certain areas on her coat like the feathers and pants required extra attention.  So I began spritzing the feathers on her front legs and the pants on her back legs with a cider vinegar/water mixture which helped to keep her fur clean.  Bailey did not seem to mind smelling like vinegar.  Her long tongue was quick to give the freshly doused area a lick.  We compromised.  I would finish my cleaning before she would do the final “once over clean”.  My equipment stash grew to include a matt remover, a pin brush, a coarse tooth comb, a couple of different sized scissors, thinning shears, the Mars Coat rake, flavoured toothpaste and large canine toothbrush.  The grooming sessions had become much longer – over an hour.  Nevertheless, I persisted and my technique steadily improved.  The grooming sessions gradually became shorter.  Now, they only take about 20 minutes.

By January, I realized that a new storage solution for all of the grooming paraphernalia was needed.  I found the perfect solution – an electrician’s toolbox.  It has lots of pockets to hold grooming tools, towels and bottles.  The box is easy to transport between the front entry area and the garage.  I left the hardware store with my prize much to the amazement of those clerks who served me when they learned it was to be used for holding a Newfoundland puppy’s grooming supplies.  Talk about thinking outside the “tool” box!

Bailey began to view our time together as a treat rather than a strange ritual performed at the end of every day.  Once we return home from our evening walk (4 kilometres), Bailey waits for a short period of time in the garage, melting the snow off her body and draining her water bucket.  I scurry inside and get the spa set up.  It involves covering the front entry area rug with a sheet followed by a large towel on top of it.  The toolbox is positioned nearby as well as a wet facecloth.  The music from CBC Radio’s Randy’s Vinyl Tap is playing softly in the background.  We are ready.  I call out to Bailey with “Bellyrub Time!” and she scampers through the door onto the towel.

She is already lying on her side by the time the door closes.  Bailey prefers the horizontal position when being groomed and I accommodate my client.  I start at the top of her head, slowly combing the crown before moving to the exposed ear.  Bailey’s eyes are already shut and little grunts escape from her mouth.  As I make my way down her side – first the front leg followed by the belly and ending with the hind leg, I alternate between combing and rubbing.  I can tell she is fully relaxed when her breathing becomes deep and slow.  I am also affected. Feeling her soft, shiny fur is comforting to me.  The tail is next.  She does not stir when I comb the bottom of her feet or spray the vinegar solution on the hind legs.  Even lifting her hind legs slightly to reach the inside of them is met with no resistance.  I return to her head.  I gently pull back her gums to brush those big molars and sharp canine teeth.  The eyes are still shut.  I often wonder if she is even aware of what’s going on.  I clean her ears with cotton balls and Q-tips before waking her up.  It is time to flip over.

Bailey’s response is to do nothing.  I am on my own.  I rotate her barrel using her legs on the bottom as levers.  She grunts.  Still, her eyes remain closed.  The “spa treatment” steps are repeated again on this side.  I am almost done.  Bailey lies stretched out, asleep.  I put everything away except the wet washcloth. Bailey begins to stir when the coolness of the cloth touches her muzzle.  The only thing left to do is wash her belly and backend.  Before this can happen, we have a ritual to perform – a vigorous rub over her entire body.  It is one that cannot be forgotten. 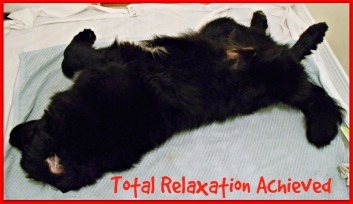 Bailey will remain lying down on her back until the body massage has taken place.  My sons now join me to give our sweetness one last rub and several hugs for the night.  Spa treatments never felt as good as they do for a Newfoundland puppy named Bailey.