Yesterday, Bailey reached the end of her first year with us.  She has grown from 20 pounds to almost 109 pounds since arriving in Labrador.  With more of her to love, it has also meant more of her to groom.  Baby fur has given way to a thick, shiny adult coat.  The Bailey that we had grown accustom to feeding up to 8 cups of kibble per day for the last eight months is now down to only 4 cups.  We are still amazed over those weeks when she gained 6 pounds and seem to inhale her food.  Bailey has brought adventure into our lives.  We have explored more of the Big Land on our daily outings with Bailey.  She has lead us to discovering new trails and wildlife such as the little black vole attempting to tunnel into a snow bank on today’s walk.  We would have missed this creature had it not been for our curious girl.  What do you give to a puppy on her birthday?  Her day was not about toys or special desserts.  Our gift to her was an extended hike through the forest – off leash of course.  She was delighted with the large, bushy branch that was lying beside the trail.

Her romp outside was followed by a deep sleep beside my oldest son as he watched a program.  She is still our sweetness, ripened by months of love, care and exercise.  Year two with Bailey is looking exciting with carting and water rescue training taking place in the summer.  It will mean her first long journey back to eastern Ontario, Canada – where she was born.  Who knows what adventures await Bailey and us.

Like many proud puppy owners, we have taken our fair share of Bailey photos over the past year.  Some of them turned out while many did not.  Puppies are very difficult to film as I found out.  It is said that a photo can say a thousand words so here goes……. a year in retrospect. 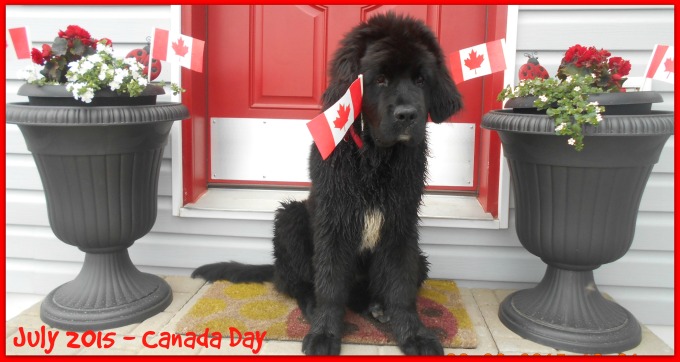