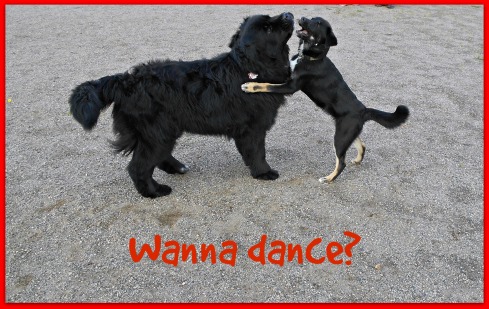 During the first week of August, Bailey discovered a four-legged canine playmate.  This energetic young fellow has been given the name Castiel.  But, for simplicity sake, Bailey knows him as Cas.  He is almost 5 months old with a strong resemblance to that of a Husky.  I like to think of him as a “surprise package” that will reveal itself as he matures.  At the moment, he appears petite and delicate compared to his huskier gal pal.  Size does not matter to Bailey.  Cas brings puppy enthusiasm to Bailey’s life.  Given her recent preference for a more sedentary life, she needs that youthful jolt of Cas energy.  Sometimes, the only way to get Bailey moving beyond our yard is to mention his name.  Cas is as good as any treat for motivating Bailey.

Cas came into her radar zone after she took notice of him exploring outside his house.  He lives just a few houses away on Bailey’s main walking route.  He was eager to engage her in play.  Bailey responded with her own brand of playfulness – dragging me with her.  Since their first meeting, the two of them have been getting together on a regular basis at the local ball field.  Bailey has come to associate this place with Cas and expects him to be there when she arrives.  Should he not be there, she refuses to play.  Bailey will just sit and wait.  Sometimes, we have not arranged a playdate.  Bailey does not hide her disappointment very well and guilt is very effective on me.  I found myself soon arranging more playdates with Cas.  Thankfully, the people of Cas are also eager to cultivate this blossoming relationship between their pup and our girl. 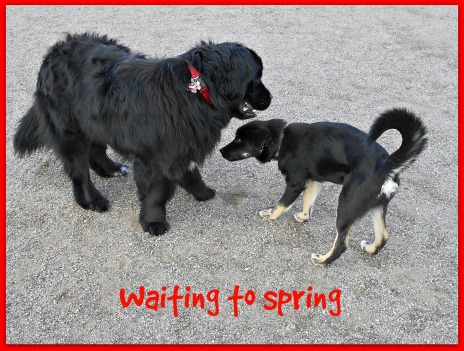 Having a regular playmate has been beneficial to both dogs.  The first ball field visit involved Cas and Bailey getting know one another off their leashes.  At the start, Cas seemed timid around Bailey who can come on a bit strong at times.  Bailey’s friendliness shone through and Cas found his comfort zone within five minutes.  They chased one another around the field – celebrating their shared freedom from being off-leash.

Cas likes to nibble her fur.  Bailey has yet to growl or snap at him.  I not sure if the thickness of Bailey’s fur insulates her from feeling his bites.  Or, maybe she does not care.  She has tried to outrun him.  However, he is becoming more agile and quicker with each passing week.  I see her tiring long before Cas does now.  Other times, Bailey will chase behind him, using her massive paws to push his backside in the direction she wants him to go.

If a ball is involved, Cas is more likely to go to it while Bailey is content to follow him part of the way.  I wonder if she is waiting for Cas to bring it closer for her to nab – minimizing any effort on her part.  Cas has caught on to her game and is now more adept at playing “keep away“.  He’s no fool.

Success at the ball field encouraged us to try other venues.  We invited Cas and his people to hike up to the waterfall featured in last week’s blog post.  The weather cooperated and the bugs were not too pesky.  Our group trooped along the trail with both dogs enjoying one another’s presence.  It was Bailey’s first time being on the trail without her leash on.  Cas, who was experiencing this trail for the first time, got to do so without his leash.  They ventured ahead at times but, for the most part, stayed close to us.

Bailey trudged into the shallows of the waterfall and demonstrated how she guzzles water after the uphill climb.  Cas did not seem to need a water fill-up like Bailey.  The other place that the two pups were taken to explore was “The Barking Lot”.  It is our local dog park and this visit would be an initiation for Cas into the dog world.  Fortunately, another 5 month old husky mix was there that Bailey and Cas had played with previously.  I think that it made the place less intimidating for Cas.  As more dogs came, Bailey participated in the usual greet and meet session.  She has matured enough to refrain from jumping on other dogs.  Those dogs that growled were given a wide berth by her.  Cas acted much like Bailey did on those early visits – not quite sure of being sniffed and chased by a posse of strange dogs.  He’ll come around once he learns the dog lingo – just like his pal, Bailey.  Their easy going personalities make them perfect playmates.